Ministry of Mines and Steel DevelopmentNews & MediaPress ReleaseFG RELEASES 142.6M FOR RESEARCH DEVELOPMENT IN THE MINERALS AND METAL SECTOR IN NIGERIA … Adegbite. 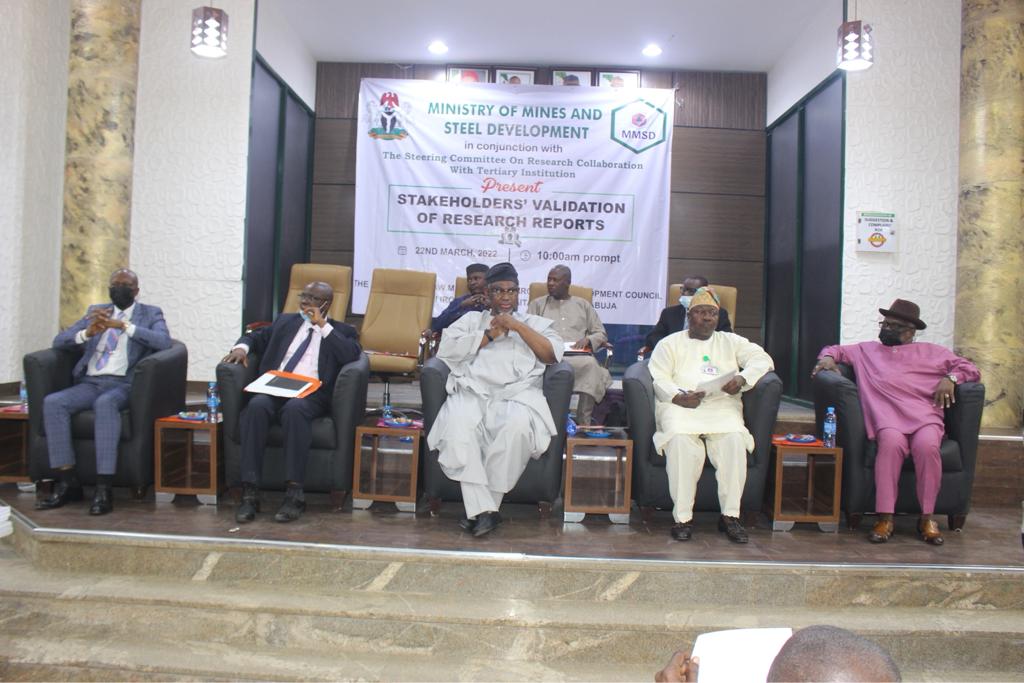 The Minister of Mines and Steel Development, Arc. Olamilekan Adegbite, has stated that the Federal Government through the Ministry has released the sum of N142.6M for research development in the Mineral and Metal  Sector.

Adegbite stated this in Abuja, Tuesday, on the occasion of the stakeholder’s Validation Exercise for the Research Development and Collaboration with some Nigeria Tertiary Institutions.

He added that these Tertiary Institutions,  after due diligence, were carefully selected by independent faculty of five (5) erudite Professors of proven integrity who have contributed to the growth of the sector.  The research covers areas of Mining Engineering, Metallurgy and Mineral Processing, Geological Mapping, Industrial and Minerals Utilization/Exports, and Energy Minerals.

The Minister further stated that to succeed in fulfilling the mandate of the Ministry on job creation, raising the sector’s contribution to the GDP of the country, and promoting sustainable mining, the Ministry released the sum of N142.6million to achieve this collaboration with the stakeholders whose knowledge of the sector could facilitate the journey to shared mining in Nigeria.

He also added that to show the importance of the collaboration and to authenticate the findings of the research, it is also important for stakeholders to validate the exercise hence the essence of the workshop today.

The Permanent Secretary, Dr. Oluwatoyin Akinlade, who was represented by the Director Special Duties, Mr. Yisau Adepoju, said in the Ministry’s effort to rejuvenate the Mining Sector it finds it crucial to collaborate with these reputable institutions to carry out this research in specific areas which is intended to open up new frontiers in the Mining sector by providing the much-needed data on the Nigerian Solid Mineral sector endorsement.

Dr. Akinlade added that it is gratifying that these reputable institutions have completed their works. For their findings to be acceptable, it is customary, like in any other piece of research work it remains only an academic exercise until critical stakeholders come together to give it life to pave the way towards its acceptance and implementation. This is what gave rise to this validation exercise by eminent stakeholders.

She stated that the Validation of the research Findings by all the stakeholders will unlock the potential and add value to the Mining and Mineral Sector.

The Permanent Secretary,  also told the stakeholders that the Ministry is ready to partner with interested stakeholders in the areas of research, exploration, exploitation, beneficiation, and the whole length of the value chain in the sector especially the gaps that would be identified in this research to create confidence as well as attract investors to the sector.

The Chairman of the committee, Prof. Gbenga Okunola, in his remarks thanked the Ministry for giving them the privilege to serve and told the gathering that nations develop as a result of collaborative research and development and that the objective of the Steering Committee is to help achieve the whole garment of the development mantra in the Mineral and Metal sector through collaborative research works such as this.