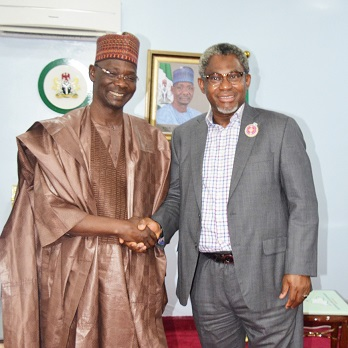 The Honourable Minister of Mines and Steel Development, Arc. Olamilekan Adegbite has called to a halt all illegal mining of mineral resources in Nigeria, which he noted was a drain on the economy that offers no benefit to both States and the Federal Government.

Adegbite made the call yesterday in Lafia, Nasarawa State when he paid a courtesy visit on the Executive Governor, His Excellency, Engr. Abdullahi Sule aimed to explore the possibilities of collaboration with the States and by so doing take the Mining Sector to its pride of place.

The Minister said ‘’ The Federal Government needs to work with the State Governments and ensure that Mining is done properly and becomes beneficial to everybody – the miners, Local, States and Federal Government, which is one of the primary reason we are here today ‘’.

He called on all the Artisanal Miners to form Co-operative Societies or Joint Venture Companies in order to interface with the Federal Government which is focused and committed to train and equip them with the required tools, stressing that President Mohammadu Buhari’s led administration is sincere and determined to diversify the economy by exploring the possibilities of creating employment in the Mining Sector.

According to him, ‘’ It is very important for us to understand the concept without violating the constitution. Mining is on the exclusive list which means it is under the purview of the Federal Government, but at the same time we encourage the State Governments to participate ‘’.

The Minister also disclosed that apart from revenue from Oil and Gas, Mining is another critical source of revenue generation through which Government financially executes its programmes and activities. He, therefore, commended Nasarawa State Government for embarking on the provision of necessary infrastructure geared towards the development of the State.

In his response, the Governor, Engr. Abdullahi Sule extolled the Minister for his patience and composure in co-coordinating the activities in the Mining Sector, since his assumption of office.

Sule assured the Minister that Nasarawa State will maintain the statuesque and allow the Federal Government to mine the mineral deposits in the State and ensure it gets its share of revenue generated. In his words ‘’ No State Government wants to change ownership of the minerals, we don’t need to have any control of it, but we just need to know what is happening ‘’. He maintained that the problems confronting miners in the State could be addressed so long as the Federal Government is ready to partner the State Governments to train and equip the artisans.

NIGERIA HAS CAPACITY TO DEVELOP THROUGH MINING-OGAH

FG INAUGURATES TECHNICAL COMMITTEE FOR THE DEVELOPMENT OF METALS INDUSTRY